So we all know that Brows are only Massive for summer. Actually, they are massive all year round and we are all looking for that special product that is going to help us achieve Blow-out Brows (er... thats a thing... I made it up). I picked up two budget brow products and put them to the test. Rimmel Brow This Way (€3.99) and essence Make Me Brow (€3.09). 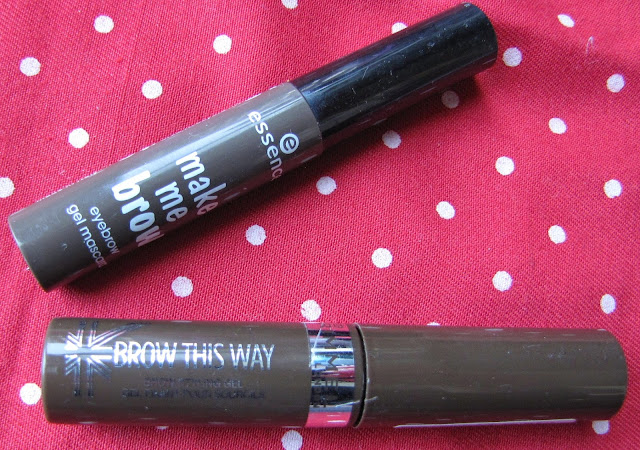 My brows are naturally quite full, I never had skinnies, my mom was good enough to hide the tweezers when I was younger and honestly, I've never really faffed with them a whole lot. Things changed once I started blogging and I started taking a bit more notice of them, and actually paying a bit of attention to them.

I picked up Rimmel Brow This Way in 002 Medium Brown in February and then I picked up essence Make Me Brow in 02 Browny Brown a few weeks later as these were the colours that were closest to my natural hair colour and I alternated using them to see which I preferred. 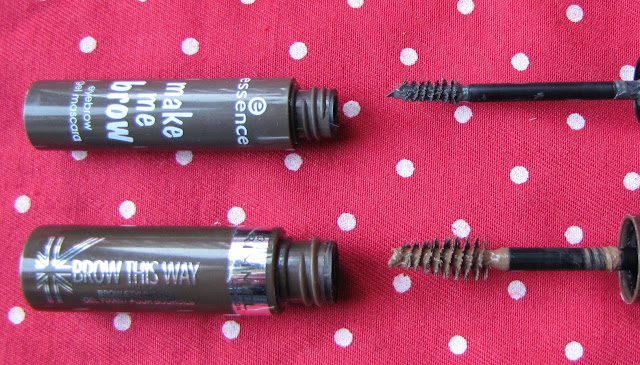 That Rimmel's brush is bigger and fatter than essence's and so picks up way more of the brow gel than you actually need to do 2 eye-brows. The essence brush is small and skinny, but this gives you loads more control over where you apply the gel.
The win here goes to essence. 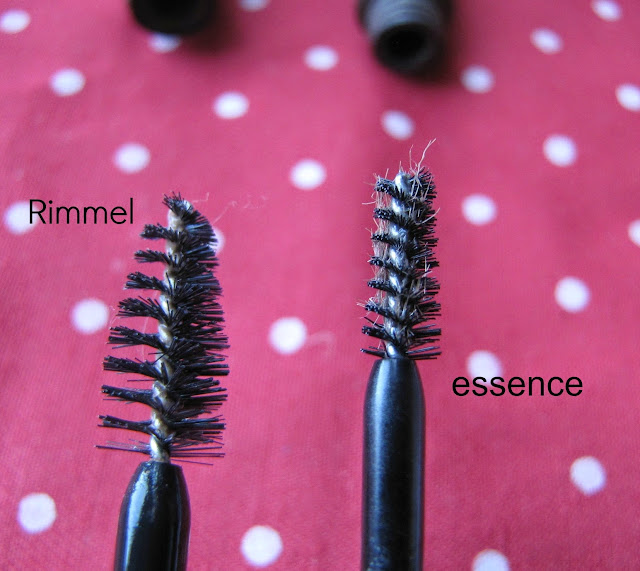 Both claim to fill in the brows with little fibres that mimic hairs to give the appearance of fuller brows. But something I found when I cleaned the product off to get a decent pic of the brushes was that there are LOADS more fibres in essence's gel than there are in the Rimmel one. I cleaned both brushes the exact same way (each was twirled in a clean dry tissue) and as I said I only noticed the difference after.
essence wins. 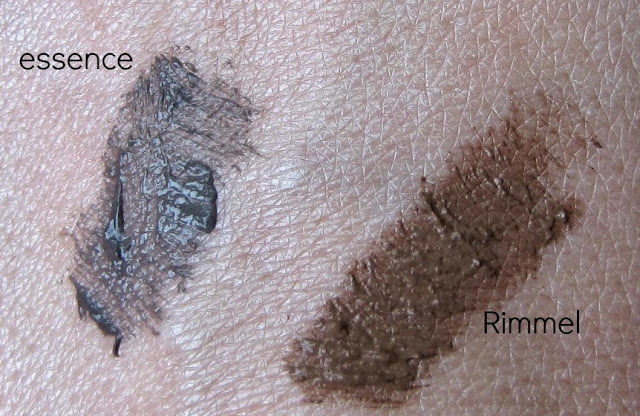 As far as colours go I prefer the essence offering. It is more ashy compared to the Rimmel one that leans more red. I like red... but not really in my eyebrows. And while it looks like the Rimmel formulation is smoother, it is more liquid and doesn't apply as easily as the marginally drier formulation of essence. The essence one is easier to place and control, while the Rimmel one tends to blob onto the brows and then you need to comb it thru, which more often than not results in too much gel on your brows.
Essence beats Rimmel here, again. 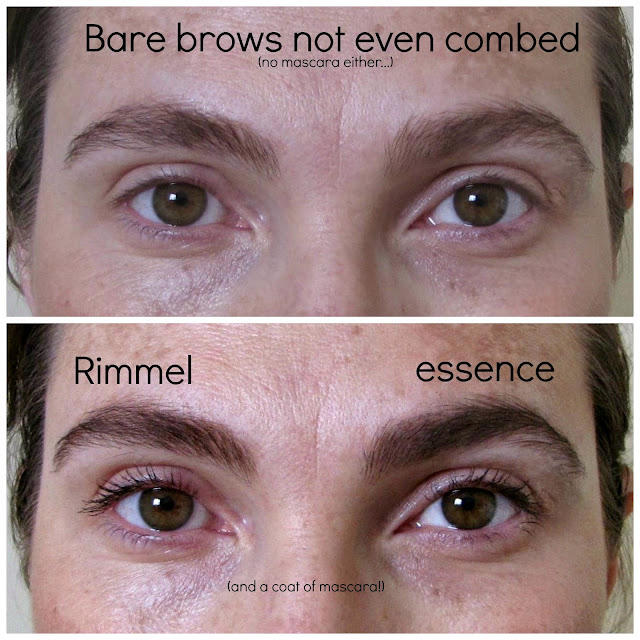 You can't really see it here (although I took about 300 pictures to try to show the difference) but I can see in the mirror that Rimmel is more red than than the essence side... Longevity is pretty even, with both holding my hairy caterpillars in check all day, with no major catastrophes, but I haven't tested these in a full on hot and humid summer yet. Neither is waterproof though... but I never swim with a full face of slap on anyway... so its not an issue.

essence also just pips Rimmel to the post in the price war too, coming in 90cents cheaper. I know that essence Make Me Brow has been compared favorably to the (way) more expensive Benefit Gimme Brow, and although I don't have the Benefit version, I know I'm not even going to bother because the essence version is so darn good.

So unless you prefer a reddish undertone to your brows (I am forever trying to get rid of the red... sigh) essence wins all of the battles in this war. But don't just take my word for it... Makeup Monster likes Make Me Brow too.

essence and Rimmel are available in most pharmacies and Penney's stores around Ireland.